Hello bookish friends! Faiza and I are back with another Book Discussion. Today we are talking about the Shatter Me series by Tahereh Mafi. This is one series that we both started with a lot of enthusiasm and hope, but ultimately were disappointed by with its final installment. Shatter Me is set in a dystopian world that is controlled by The Reestablishment, a ruthless governing body. Juliette is a girl with a touch that can kill. (Think Jubilee from X-Men.) She’s been locked up in prison by The Reestablishment for little less than a year when they take a new interest in her as a potential weapon to be used against their enemies.

Shatter Me was originally published as a trilogy with two novellas. Then three years ago, Tahereh Mafi decided to revisit this world and add on three more books and two novellas in an attempt to expand the story and provide closure for the characters.

In case you are wondering, here is the correct reading order for this series:

Read on for more of our thoughts on the Shatter Me series!

*Mild spoilers for the series are included.*

END_OF_DOCUMENT_TOKEN_TO_BE_REPLACED

Hello everyone! A few weeks ago I shared the Once Upon A Ramadan Book Tag I created for this year’s Ramadan Readathon. Today I’m sharing my post that I hope you will enjoy! 🙂

END_OF_DOCUMENT_TOKEN_TO_BE_REPLACED

Hello bookish friends! Faiza and I are here today with another Book Discussion! Today we are talking about London Shah’s YA debut, The Light at the Bottom of the World. This is a unique sci-fi tale that is set in a post-apocalyptic world where humanity lives underwater. It stars a British-Muslim teen named Leyla McQueen who is on a mission to save her father from false criminal charges and in the process uncovers a startling truth. Read on for more of our thoughts on The Light at the Bottom of the World!

END_OF_DOCUMENT_TOKEN_TO_BE_REPLACED

Today we are celebrating the Book Birthday of the middle grade anthology Once Upon an Eid! S.K. Ali and Aisha Saeed brought together a dream team of fifteen Muslim authors to contribute short stories themed around Eid. This anthology is beautiful inside and out, and I highly recommend everyone immediately add this to their #MuslimShelfSpace.

Read more of my thoughts on Once Upon an Eid in my review right here! 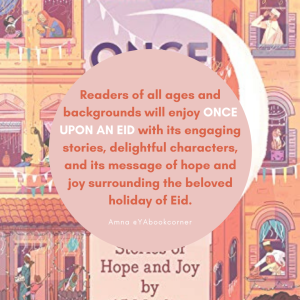 END_OF_DOCUMENT_TOKEN_TO_BE_REPLACED

Welcome to YA Book Corner!