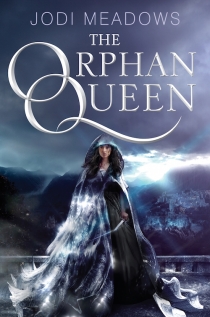 Publisher: Katherine Tegan Books (Harper Collins)
Publication Date: March 10, 2015
Genre: Fantasy
Pages: 400
Summary: This new fantasy duology is centered around a young girl, Princess Wilhelmina, fighting to reclaim her throne and restore her kingdom. However, a dark magical force, Wraith, threatens to destroy everything in its path. With magic deemed illegal in the Indigo Kingdom and a mysterious vigilante named Black Knife protecting the citizens, Wilhelmina must decide if exposing her secret is worth the risk.

END_OF_DOCUMENT_TOKEN_TO_BE_REPLACED 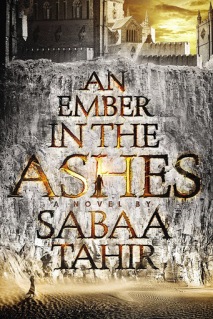 Publisher: Razorbill/Penguin
Publication Date: April 28, 2015
Genre: Fantasy
Pages: 446
Summary: Set in a world inspired by the Roman Empire, this fantasy debut by Sabaa Tahir features two characters from different worlds, each fighting for what is most important to them and learning what they are willing to do to risk it all for family and freedom. Laia is a Scholar. She is driven by love for her family to join the Resistance in exchange for their help. Elias is a Mask. He is a soldier struggling to reconcile his moral compass with his duty. As Laia and Elias face obstacles and tests of character in their individual journeys, fate keeps throwing them together forcing them to realize that they will need each other to fulfill their destinies.

END_OF_DOCUMENT_TOKEN_TO_BE_REPLACED

Publisher: Farrar Straus Giroux/Macmillan
Publication Date: March 4, 2015
Genre: Romance/Dystopian
Pages: 355 pages
Summary: When a young aristocratic girl, Kestrel, makes a bold purchase of a slave, Arin, it sets a course of events that leads to the upending of her world.

END_OF_DOCUMENT_TOKEN_TO_BE_REPLACED

We can’t wait to read these books in the new year! Click the titles below for more info and to add to your GoodReads TBR! 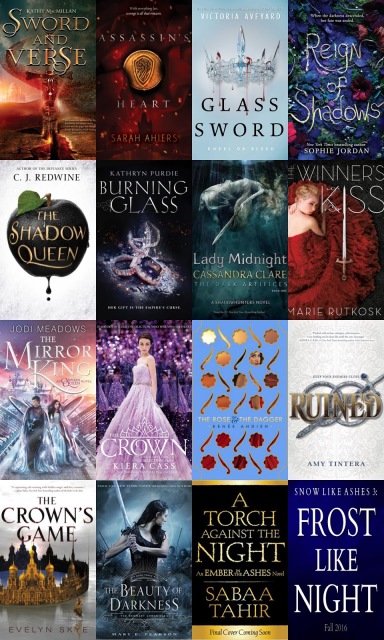 There are many wonderful books we read this year. They spanned across all genres. Some were by debut authors and others were the continuation of a series. But all the books on our list left us with massive book hangovers and tons of FEELS.  🙂

1. An Ember in the Ashes by Sabaa Tahir
What it’s about:  Laia, a slave, is determined to fight against the militaristic government to bring peace and freedom for her people. Elias, a soldier, is also seeking freedom from the government but only for himself. When Laia and Elias cross paths they each have to question what it is they are willing to sacrifice for their ultimate goal.
Why you should read it: Fantastic, well developed characters; dual point of view narration; intense, gripping plot; non-stop action; beginnings of a love story; and excellent world building
Rating: 5 out 5 stars
2. Queen of Shadows by Sarah Maas
What it’s about: Aelin comes back to Adarlan to face off with the King and Arobynn Hammel.
Why you should read it: So many amazing, lovable characters; kick ass action; romance, humor, and drama; narration in multiple points of view; and just epic storytelling
Rating: 5 out of 5 stars
3. The Orphan Queen by Jodi Meadows
What it’s about: An orphaned princess, Wilhelmina,  fighting to reclaim her crown, defeat the dark supernatural forces threatening her kingdom, and falling in love with someone unexpected.
Why you should read it: Strong, relatable protagonist;  great cast of supporting characters, a romantic subplot that is an interesting take on a typical love triangle, and a compelling magical mystery.
Rating: 4.5 out 5 stars
4. The Wrath and the Dawn by Renee Ahideh
What it’s about: This is a retelling of the Arabian story, A Thousand and One Nights. In the kingdom of Khorasan, King Khalid takes a new bride every night only to kill her the next morning. When Shazi’s best friend is the latest victim she is determined to end his reign of terror and avenge her friend. She volunteers to become his wife and uses her cunning skills to stay alive long enough to fulfill her plan.
Why you should read it: Beautifully written with complex, compelling characters; enticing, romantic plot with a hint of magical mystery.
Rating: 5 out of 5 stars
5. The Heart of Betrayal by Mary Pearson
What it’s about: Things for Lia become more complicated than ever when she is held captive in Venda and has to make a choice between Rafe and Kaden for her heart.
Why you should read it: this is a really well written love triangle, good pacing of the plot with an engaging story; expanded world building; characters worth investing in
Rating: 4.5 out of 5 stars
Here’s a quick look at what we read during the holidays!

1) A Wicked Thing by Rhiannon Thomas
This story is a Sleeping Beauty retelling. It picks up the story post “true love’s kiss” and hints how things may not turn out “happily ever after” for Princess Aurora. I really wanted to like this book but it was very difficult to get invested in the story. The plot progression is tedious, it’s difficult to connect with the protagonist, and overall there was no captivating or compelling aspect to the story. I’m not inclined to the pick up the sequel, Kingdom of Ashes, coming out in February.
Rating: 2 out of 5 stars
2) Daughter of Deep Silence by Carrie Ryan
If you ever watched the ABC thriller show Revenge and enjoyed it, then this book is for you. The novel follows a young girl, Frances, as she executes her revenge plan against those who are responsible for the death of her family and best friend on a cruise ship. This is a very entertaining read. The story is well paced, mysterious, thrilling, and with a hint of romance. It also has a very emotional story arc for Frances as she struggles with identity issues and grief. This is a stand alone novel and it does have a satisfying conclusion.
Rating: 3 out of 5 stars
3) A Thousand Pieces of You (Firebird #1) by Claudia Gray
This story centers on Marguerite, the daughter of two brilliant scientists who create a device to travel between universes. When her father is murdered and the killer uses the device to escape to an alternate reality, Marguerite chases after him to avenge her father. What results is a love story masquerading as a scifi adventure. It felt as though the scifi elements were used as a tool to push the love story. It is through all the dimension hopping that a unique twist to the love triangle is created. At times the plot really stalls and loses momentum, especially when they linger in a dimension too long. However, it was interesting and fun to read about the different worlds and lives the main characters lead. The three main characters – Marguerite, Theo, and Paul – are interesting enough but pretty standard for a YA novel. I did like how the flashbacks were incorporated into the story and gave readers much needed backstory on certain characters and their relationships. This is the first book in a planned trilogy. The sequel, Ten Thousand Skies Above You, was released in November and is on my TBR list.
Rating: 3 out of 5 stars
4) All In (Naturals #3) by Jennifer Lynn Barnes
Cassie and the Naturals team go to Las Vegas to solve a string of serial murders. This particular case provides an opportunity for us to learn more backstory on two surprising characters. Barnes does a wonderful job creating suspense, mystery, and intrigue into the main crime plot. Good pacing, well rounded characters, and plenty of action make this a worthy read.
Rating: 3 out of 5 stars
5) All Fall Down (Embassy Row #1) by Ally Carter
This story follows sixteen year old Grace, who witnessed her mother’s death, and has been suffering from severe emotional and psychological trauma ever since. She is sent to live with her grandfather, a U.S. Ambassador, in Adria. Much of the story centers on her proving that her mother didn’t simply die in a fire accident, but was murdered. I was very excited to read this new series only to be really let down by it. It was very difficult to read Grace’s emotional turmoil and her struggle to keep her sanity. We see her suffer from panic attacks and paralyzing flashbacks. While this adds depth and complexity to Grace’s character, it also sets a dark tone for the novel. There is lightness in the form of Grace’s friends- Noah, Megan, Rosie, and Alexei – who do their best to support her and help her get back to living a normal life. It is with their help that Grace finally learns the truth of what happened the night her mother died and its a truly heartbreaking reveal. I was expecting a more fun and adventurous story with a light hearted vibe. Instead All Fall Down is a tragic tale of a girl trying to convince the world she isn’t crazy. Even though I am disappointed with this book, I hope that it will improve with the sequel.
Rating: 2 out of 5 stars
6) See How They Run (Embassy Row #2) by Ally Carter

Grace is still dealing with her PTSD from her mother’s death and is struggling with the guilt of the truth she learned in All Fall Down. The main plot has Grace caught up in a conspiracy that targets one of her friends. Once again we have Noah, Megan, Rosie, and Alexei helping Grace figure out the truth in time to prevent an international political disaster. Along the way Grace also learns two shocking family secrets. I really wanted to love this series as much as I do Carter’s previous ones but alas, I just don’t. I find it difficult to connect with Grace and invest in her story. By this point I had hoped that she would make some progress to heal from the trauma she has experienced but she continues on her emotional downward spiral and this takes up a majority of the book. There is a great cast of supporting characters that were underutilized. I wished to see them having more meaningful interactions with Grace. I was happy with Alexei having a more significant role this time around and there was some progress in his potential romantic relationship with Grace. We also get to see more of the sibling relationship between Jamie and Grace. The conspiracy unfolds at a good pace, held my interest, and kept me guessing at the truth. It was interesting to learn more about the history and traditions of Adria. Overall, this book wasn’t very fun to read and was a disappointment. It does end on a cliffhanger so I’ll be reading the next book to satisfy my curiosity.

Welcome to YA Book Corner!

Follow YA Book Corner on WordPress.com
Back to top